Chipper CI was designed to make it quick and easy to test and deploy your Laravel applications.

We're going to see how to setup a Laravel application, add some tests, and then use Chipper CI to test and deploy it.

If you're not starting from zero - great. You'll have most of this done already. However, if you want to follow along and spin up a new application to try Chipper CI out, here's how!

Straight away, we can actually run some tests:

But if you wanted to create some new tests, you can! Let's create a new controller, and have it bootstrap a test for that controller as well:

We created a new route, and assigned the handler for that route to the MyFirstController class's respond method. This just responds with the text “my response”.

When we created the controller, we had it create a test. We can find this test in tests/Feature/Http/Controllers/MyFirstControllerTest.php.

If all goes well, we should be able to run our tests and see this new test is passing!

Now that we have an application and some tests, we can setup a project in Chipper CI, run our tests, and see how we might deploy it.

Setting a project up in Chipper CI involves logging in, clicking to create a new project, and authenticating again GitHub, GitLab, or BitBucket. Once authenticated, you'll see a list of repositories to choose from, and you can create select whichever you'd like! 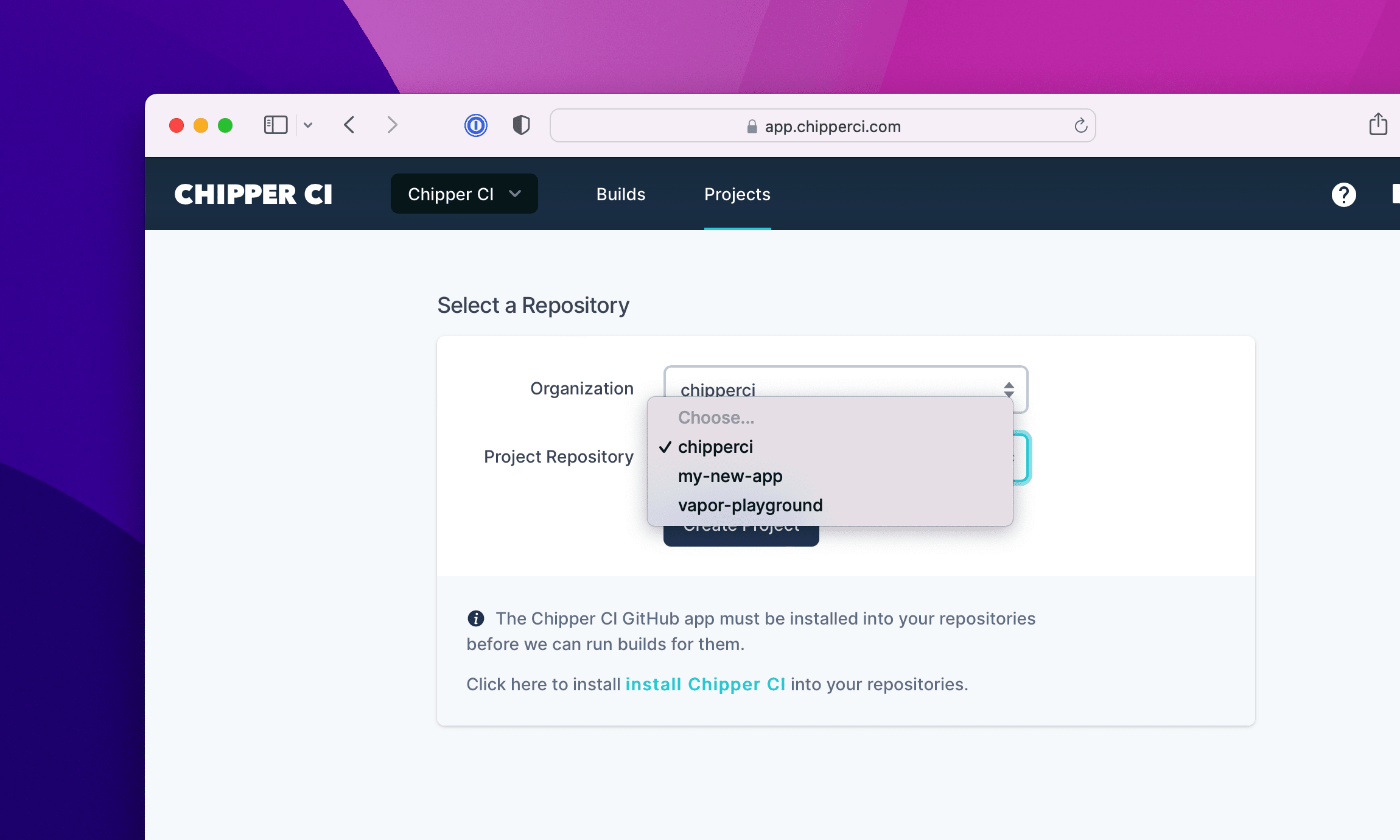 Once the project is created in Chipper CI, you'll see instructions on adding a .vessel.yml file. It's pretty simple! 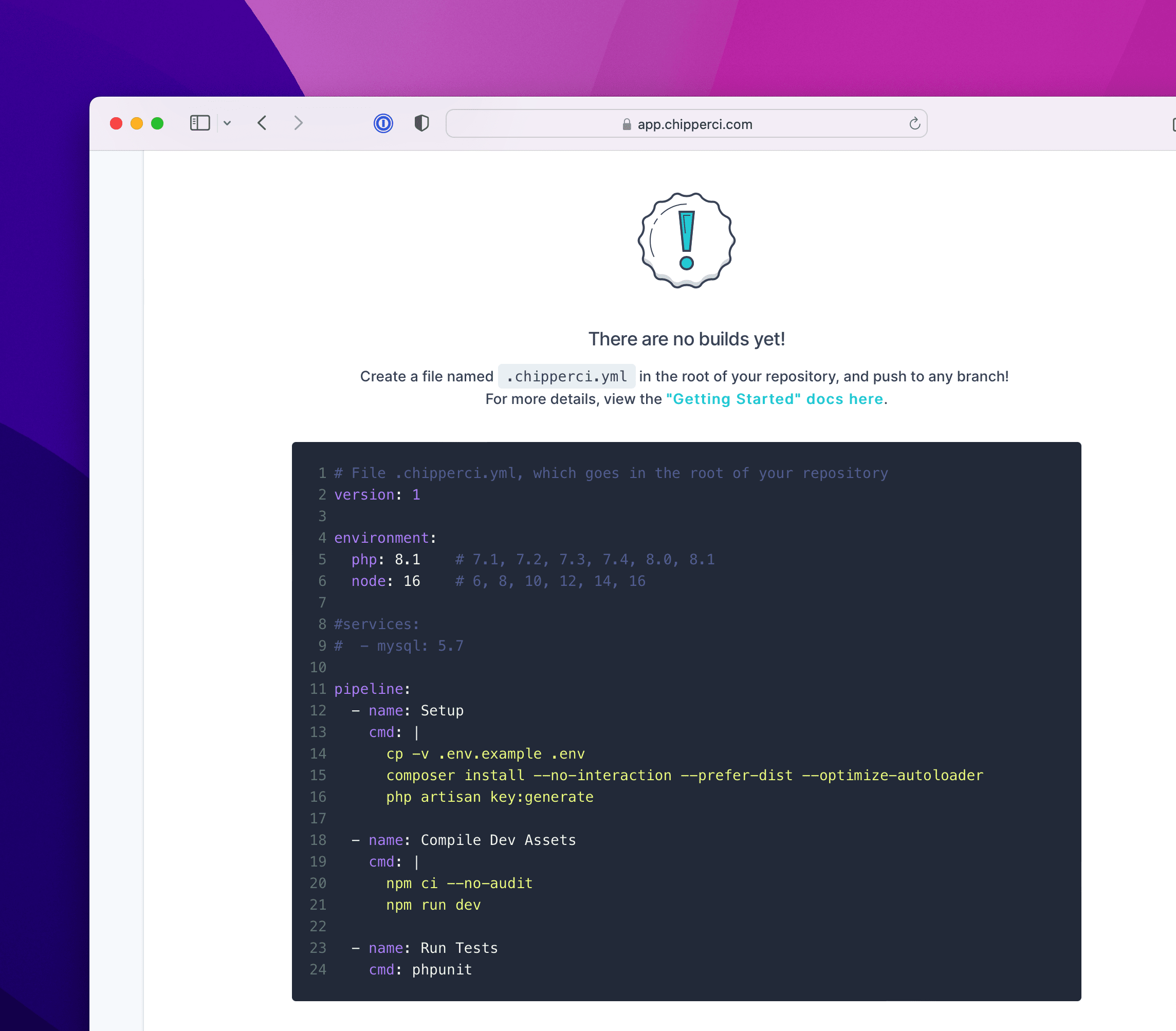 You can copy/paste that Yaml, and create a new file in your repository. Once you push that file up, you should quickly see a build started for that repository!

The Chipper CI Yaml file controls what happens in your build. You can define the PHP/Node version, additional services (MySQL, PostreSQL, Redis, Docker, and more), setup build triggers, and more!

In our example above, I didn't add any services, and I removed the step that uses Node to build our static assets - we didn't it in our case! 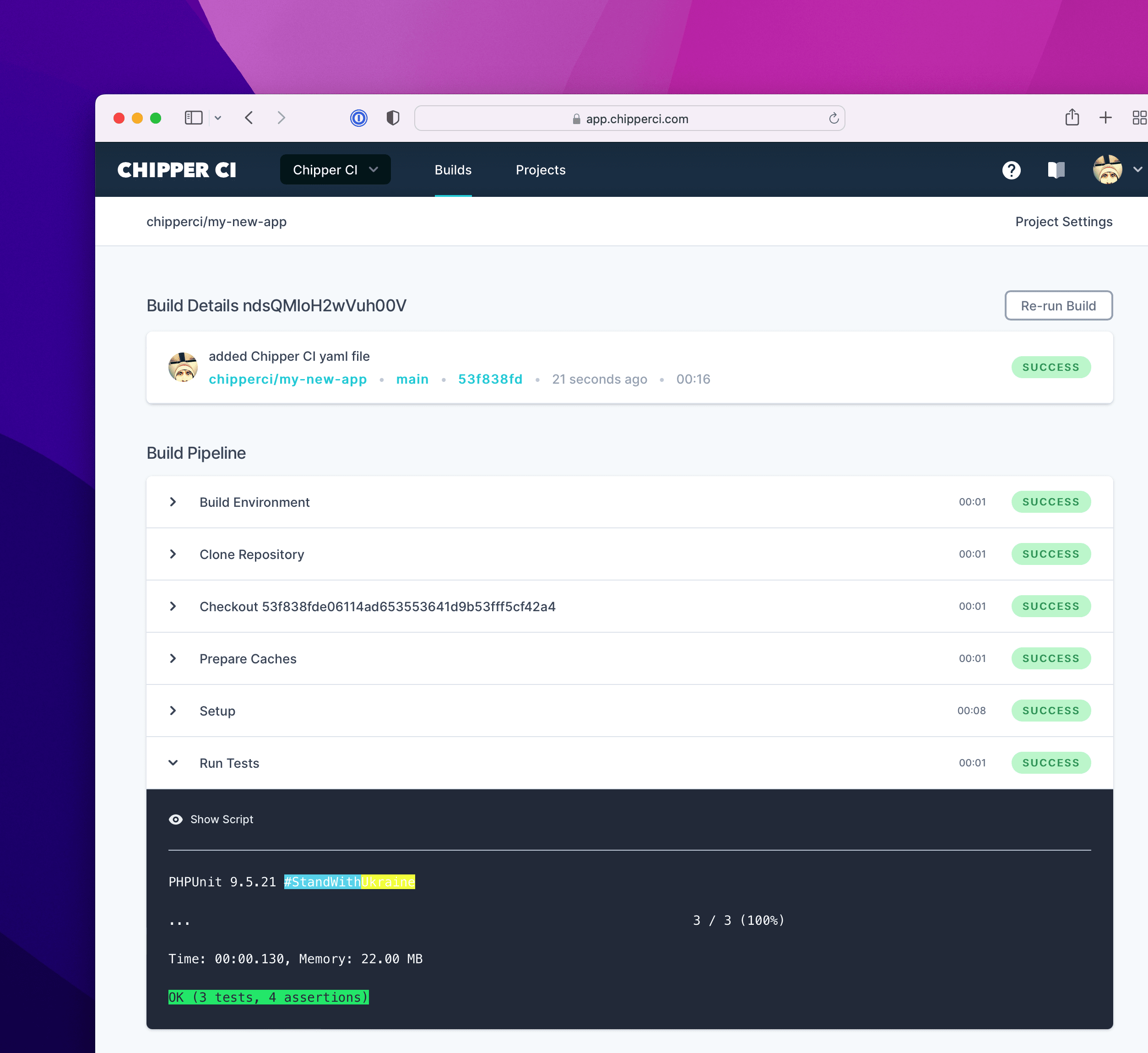 That was pretty quick! We didn't need to muck about with creating a custom Docker image, or figuring out a thousand different configurations. It just worked!

If you need or want to get fancier, you can bring in more services, and decide when to build your application. Here's an example chipperci.yml file:

This Yaml file does a few more things than our first example:

How you deploy depends on where your site is hosted. Many people use Forge, Envoyer, Vapor, or Fly to deploy their Laravel application.

These deployments boil down to either sending a webhook, or running a command. We can see how we might do that in our .chipperci.yml file here. There's no magic!

I'll show a few examples of what it might look like to conditionally deploy to a production vs staging environment.

We have examples of sending a webook with curl, running the vapor deploy command, or running fly deploy. These run conditionally based on the branch is pushed to, using the provided environment variables.

Chipper CI tries to be the easiest solution for CI/CD with Laravel. The environments are pre-configured for you - all you need to do is select a few options.

It's simple and powerful, enabling you to do what's most important - write code, and get out of your way so you can test / deploy your applications without headaches.